Arguments over money have long been known as top causes of divorce. If a married couple starts to argue about the household budget, its friends and family start to get worried. A Kansas State University study took a closer look at how financial problems and divorce are linked and drew an unexpected conclusion. According to a recent Huffington Post article, the research indicates that couples that argue about money at any point during their relationships, especially early on, are more likely to divorce. Previously, financial problems were only linked to divorce when they occurred simultaneously. 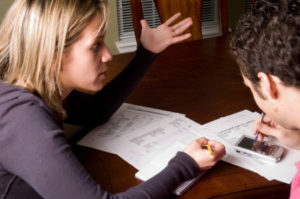 The study also found that other factors, including newly acquired wealth, savings and debt, are inconsequential. In theory, couples with a high net worth that fight about money are just as likely to divorce as couples on government assistance. The study also determined that arguments about finances are the most influential marital problem for both men and women. That’s right—fights about money trump fights about sex, kids and in-laws.

The study also delved deeper and tried to determine why fights about money are so impactful on relationships. It concluded that fights over money tend to last longer and provoke more emotion than other fights, leading to a lower overall relationship satisfaction level. The study also hypothesizes that fights about money are really rooted in deeper marital issues like trust, power and support.

The way each spouse views money may also contribute to the intensity of the arguments. Oftentimes, our beliefs about money develop during our upbringing. One spouse may view money as a means of security and status, while the other views it as insignificant. These disagreements in worldviews between spouses often indicate a level of incompatibility.

The Huffington Post points out that a University of Missouri study from 2011 supports the conclusions drawn by the Kansas State researchers. The 2011 study found that couples that are going through financial hardships and receive government assistance are more likely to divorce, particularly if they have had disagreements before encountering hardship.

If you are considering getting a divorce, it is important to speak with an attorney about what to expect. At Elliot Green Law Offices, we have experience that you can rely on. We work hard to ensure a fair, quick and straightforward divorce process. We encourage you to contact us at 718-260-8668 for a free, 30-minute initial consultation.

BROOKLYN, New York. If you have been thinking about divorce for some time, one of the most difficult challenges you’ll face on the road ahead is breaking the news to your partner. While couples who are on the path to divorce … END_OF_DOCUMENT_TOKEN_TO_BE_REPLACED